This will be the place to look to find information on all of the watercraft that Wes has used in his stories. 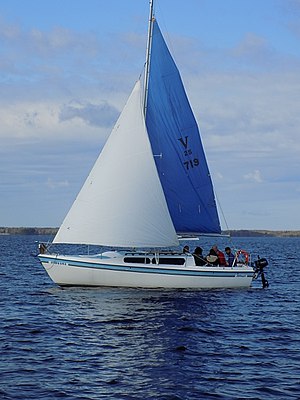 A MacGregor 25 twenty-five foot trailer sailor with a swing keel which made it easier to get the boat onto the trailer, and allowed her to sail in shallower waters than a fixed keel boat.DS17

Amanda Lewis bought the Knick-Knack to do it up and take it sailing round Florida in the winter. In doing it up she realised it was a bit limited for what she wanted to do. She sold it to Adam Caldwell who wanted a boat to keep at Frenchtown Harbor on Lake Erie so he could gain sailing experience weekends or evenings without travelling all the way to Winchester Harbor .

It’s very lightweight, really pretty Spartan, and you wouldn’t want to take it out unless the weather is pretty nice. It’s in good shape and has been gone through recently. It would be possible to do limited cruising on it, but it doesn’t have a cabin you could stand up in. It is more or less set up for singlehanding, and it doesn’t have the fourteen tons of electronics that every boat salesman seems to think is a requirement these days. DS17

The interior was mostly just painted fiberglass, and it had a couple side bunks and a front V-berth that were mostly thin foam pads. The galley was nothing much more than an alcohol stove and a tiny sink; the refrigerator was merely an ice chest like a family might take to a picnic. DS18

Adam Caldwell sometimes sailed solo, sometimes with a companion. He trailed the Knick-Knack to Canada to sail the Georgian Bay area of Lake Huron for a couple of weeks, accompanied by Carolyn Lewis.DS26 He later trailed it down to Florida and spent a few months sailing round.DS32 While he was in Florida he unexpectedly met Audrey Melbourne and she accompanied him for a number of weeks.DS33

The Sailboatdata.com page is MacGregor 25

Wooden Nordic Folkboat in 2007 on Wikipedia

Mary Sue is an International Folkboat, manufactured in Sweden in 1970. The International Folkboat (or IF Boat) is a 26 ft. fiberglass sailboat modeled after the Folkboat, a 1942 design constructed from wood. The stated purpose of the Folkboat design was to provide an inexpensive cruising sailboat, suitable for couples or small families. With that in mind, it was designed with an usually high ballast to displacement ratio, to make it safer in high winds and waves. Numerous transatlantic crossings, and a few circumnavigations, have been completed in Folkboats.

In the mid 1960s Marieholm, the largest Folkboat builder, commissioned designer Tord Sunden to create a version of the design for fiberglass construction, in order to take advantage of the material’s low-maintenance qualities. While maintaining the dimensions and shape of the original design, he was able to create an improved interior which, while still minimalist, included an enclosed toilet and a pull-out alcohol stove and a sink. He also made provision for installing a small, one-cylinder inboard diesel engine. The primary deviation from the original design, though, was in eliminating the carvel (overlapping) planked construction of the original, in favor of smooth sides. This was to create controversy later when a fiberglass hull mold was pulled from a wooden Folkboat. Because this “unimproved” later version was more faithful to the original design, it became known as the Nordic Folkboat and the Folkboat Association voted to request Marieholm to change the name of the International Folkboat to IF-Boat.

The Marieholm page is here: A Marieholm International Folkboat Page.

Mary Sue was sailed by the fifteen year old Rachel Kunkle and Jake Lewis from Winchester Harbor to Sandusky, Ohio. It was Jake's first experience of sailing.WH11

Mary Sue was purchased by Matthew Caldwell in the late 1990s and refitted over the course of 4 years with the help of his biological father, Jake Lewis. She has a diesel auxiliary engine for power when not under sail and the original alcohol stove has been replaced by propane and diesel stoves. Circa 2003, as Matt is refueling in St. John’s, Newfoundland before setting sail for Ireland, he meets Mary Sue O’Leary on the fuel dock. She asks if she can come along and Matt, thinking she’s joking, agrees. Their adventures are described in Blanche Tickle Girl.

A Walton 36, kinda like the Pixie, a bit bigger but built and fitted out a little more for offshore... It’s a touch on the old-fashioned side, and doesn’t have every electronic gadget known to man. When first seen by Adam Caldwell, Jake Lewis and Amanda Lewis Moonshadow had a gas Atomic 4 engine which wouldn't turn over and would need replacing.DS28

Adam Caldwell beat the salesman down by $14,500 when he bought it. He and Amanda sailed it from Traverse City to Winchester Harbor .DS29 Adam allowed Jake to take the dead engine and attachments to install what was needed on Rag Doll.DS31

Adam worked with Jake Lewis on the repairs and changes he wanted on Moonshadow. He sailed it to Frenchtown Harbor to move aboard full time and set of on a trip to Blanche Tickle the down the east coast to spend the winter in Florida. On the morning he was leaving he was pleasantly surprised that Audrey Melbourne turned up to join him on the trip.DS36

Greg B posted on the old SLT forum that perhaps the Moonshadow was a Walton 37 and Wes responded that it sounds very much like the Moonshadow. Greg B provided the link to some data

Pixie was a Parabellum 21, a fictional small, trailerable sailboat kit. Designed as a cheap kit boat that’s easy to build and light enough to keep on a trailer. The factory fiber-galss work was fairly good but the fittings were the cheapest that could be bought.WH16 Possibly based on the Windward 21 manufactured from 1964 to 1987 or the Southwind 21 manufactured from 1967 by Luger Industries (USA).

Jake Lewis purchased it partially assembled and with Nate Kunkle's help finished the construction of it.WH16, WH17, and WH18 Rachel Kunkle named it the Pixie.WH20 Jake and Rachel have a lot of fun with it.

Jake trailered Pixie from Winchester Harbor to Tarpon Springs, Florida one November and spent the winter sailing round. Even though she had to finish school, Rachel was very upset that he'd gone without her.WH29

Adam Caldwell learned to sail on the third Pixie owned by the Lewis family at Winchester Harbor . It was a thirty-one footer and quite a bit bigger and more comfortable than their first Pixie. DS8

Rag Doll is a Triton 28 built by Pearson in the 1960s. The Pearson Triton was introduced in 1959 as one of the first production sailboats to utilize fiberglass in its construction. Designed by Carl Alberg and inspired by the Folkboat (see Mary Sue), the Triton was intended to allow a couple or small family to go sailing at a reasonable price. At only 28.5 ft. overall, the Triton included an enclosed head and a basic galley consisting of a sink and built-in icebox for comfortable weekend cruising. It also boasted a raised coachroof at the rear of the cabin, to provide standing headroom, and the fiberglass construction meant the Triton had more room below than a wooden yacht of the same size. Because of these factors, the Triton was a huge success, with roughly 700 built before production ceased in 1968-70. For power, most Tritons were equipped with the then-ubiquitous Universal Atomic 4 gasoline engine. Due in part to the stability of its full keel design, many transatlantic passages and a double circumnavigation have been conducted in Tritons. The Blue Water Boats profile of the Triton can be found here: Triton 28

In approximately 2008 or 9, a very neglected Rag Doll was purchased in an auction by Ron Lewis, on behalf of his sister Amanda Lewis. The story of Rag Doll’s refitting, including building a new interior more suitable for extended cruising, and Amanda’s adventures sailing her is told in Rag Doll.

The Wikipedia page for the Triton is here Triton 28

The Wikipedia page for the Atomic 4 is here Atomic 4

Winter Haven was a Bayliner 250, a trailer boat 25 feet long, although it had a huge volume for a trailer boat, several times the size of the Knick-Knack, which was of the same length. The bad part was that it sailed like a pig and was pretty dependent on its outboard motor.

The Lewis family owned Winter Haven with several other families. The boat was normally kept on a trailer on the western side of Florida in the summer, and only sailed in the winter, usually between Ft. Myers and the Keys. What Amanda Lewis knew about sailing in Florida came from her experience on the Winter Haven, and it was one reason why she’d wanted a more capable boat. RD4