This article is about the jet. For Jennlynn's air charter company, see Skyhook Aviation. 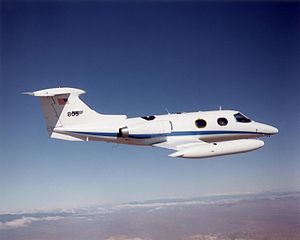 The Skyhook is the name of a business jet that Jennlynn Swift purchased for her air charter company, Skyhook Aviation. It is her fourth airplane, after Songbird, her Cessna 310, Soiled Dove, her Mooney Mark 21, and Magic Carpet (aircraft), her Cessna 150.

In one of her working sessions in August 1998 at the Redlite Ranch, Jennlynn overheard about a Learjet (a business jet) that was seized by US law enforcement from drug runners.MC31 At that time a typical price for similar aircraft was about half a million dollars. It was set to be auctioned off, but the auction was fixed to "forget" to advertise it and sell it off for a little more than a hundred thousand. At that time, Jennlynn was vaguely considering getting a business jet, but was spurred on by this opportunity.MC23

Jennlynn ended up buying the jet for $107,622. She brought her chief pilot -- the retired USAF general Mike Hanneman along to fly it home, and he applied some pressure to the crooked DEA official who was trying to wiggle out of selling it to Jennlynn.MC24

It was a 1964 (or possibly 1967RR30 AT11) Learjet 24A, one of the earlier private jets and had the earlier, less efficient and louder engines plus at the time of purchase had the original avionics. On the other hand, like a classic sports car, it looked fast even sitting on the ground, had a top speed in excess of 500 miles per hour, and had some excellent maneuvering ability due to its design pedigree which included a Swiss fighter/bomber proposal.MC24 That capability, combined with Jennlynn's determination, allowed her to win a legendary mock dogfight in December 2000.MC28

Jennlynn called the jet Skyhook, and she was glad that Mike Hanneman didn't let her waste the name on the Songbird.MC25

The aircraft earned her the name Learjet Jenn, the fastest woman in the state of Nevada. Jennlynn loved flying it; she considered it not quite as good as sex. She also called it, probably half-seriously, her new sex toy.MC25

Originally it had the registration N2030G;MC24 since it was a drug running aircraft, Jennlynn decided to change the number; it became N590SH: the letters stand for 'Sky Hooker' and the numbers are the month and year Jennlynn turned out at the Mustang Ranch.RR30

After Jennlynn bought the Lear she had a professional hazardous materials (HAZMAT) cleaning crew go through the airplane thoroughly to make sure any traces of coke were removed. But none of that meant anything to a drug dog with a good nose; let one of them near the plane, and the dog went off like it was a major drug bust, followed by a long and sometimes destructive yet futile search by the customs people. The last time it happened It cost Jennlynn $8,500 to have the seats reupholstered and the cabin redone, and the lawsuit to recover the damages was still pending.MC31

It's interesting to compare the "classic" Learjet 24A to a newer model, Learjet 85 -- which is still in development in 2012 -- and the Cessna Citation IISP. I can't find specs specifically for 24A (mostly the later 24F is available).